I haven’t been inspired lately, hence the silence on my blog. Pls excuse me 🙂

I came up with a new addition to the blog called:

This is an old image, but I am really feeling Alek Wek’s look in the campaign ad for the MAC Cosmetics collection called The Stylistics. The collection came out back in 2007. What do you think?

Please join me as I try to figure it out:

Because I love you guys soo much, I keep my “eyes and ears to the streets” for you 🙂

With this recession we all need to help each other out. Keep checking back periodically as I will be posting deals from time to time. The first deal being:

Some of my favorite things from Urban Decay are their Liquid and Glitter liners. I also love the Urban Decay eyeshadow primer potion and some of their eyeshadows.

As I said in my introduction blog entry “I’m inspired by everyday things, everyday colors. I love recreating looks while adding my own personal twists”, hence the creation of my Celebrity Inspirations series and now, my new series called Recreating Icons….My Iconic Series.

About 2 years ago, I watched the documentary “Konkombe: The Nigerian Pop Music Scene.” The 1988 documentary, depicted how Nigeria’s distinctive juju, Afro-beat, Afro-pop and Lagos street music styles in the 1970’s used traditional melodies and rhythm to influence modern music in Nigeria. One of the Artist featured in the documentary was Fela Kuti. Growing up, Fela’s music always struck a chord with me (even if I really didn’t understand the gravity of what he was singing about at the time). As I grew older I started to realize just how much he did to stand up to the social and political injustices in Nigeria through his music.

There was a scene in the documentary, in which a few of his 27 wives (He married them in one ceremony to make a political statement) were sitting around him. They seemed to really adore him. They all looked so regal and beautiful. Their sense of style was inspiring to me. I realized the amount of makeup they had on might have been considered offensive back then.  But my take on their look, is that they were ahead of their time.  These women did not follow trends, they made them! They really didn’t care what society thought of them. I also began to wonder about the dynamics between the wives. Did they like each other? Did they fight? Were they happy? All these thoughts led me to the concept of a photoshoot I did recently.

As I started to process the information, I realized I wanted to create a story (well, a story that made sense to me). Enter…four amazing models and one very talented photographer. Ed Frazier is a professional photographer based in Charlotte. He was able to capture my vision perfectly. I would like to share some of the images from the photoshoot. 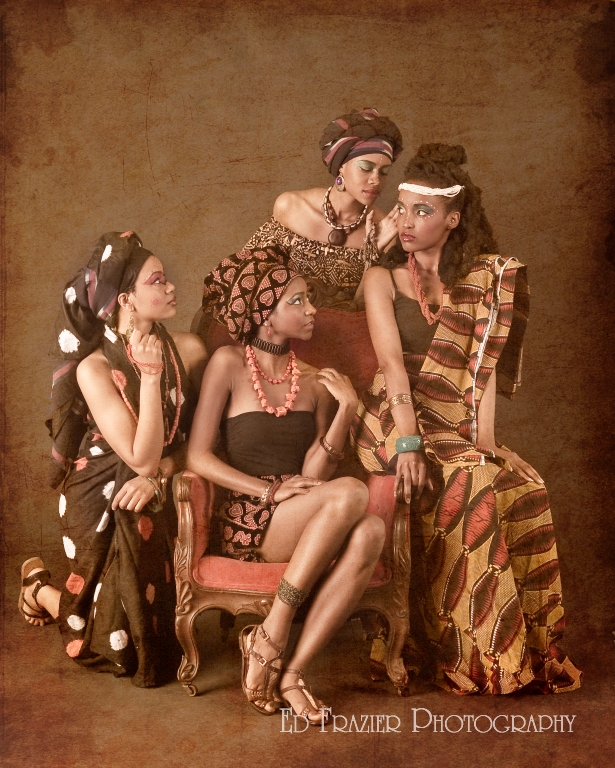 Interpretation of some of Fela's Wives interacting...

Bianca as one of Fela's Wives

Justice as one of Fela's Wives 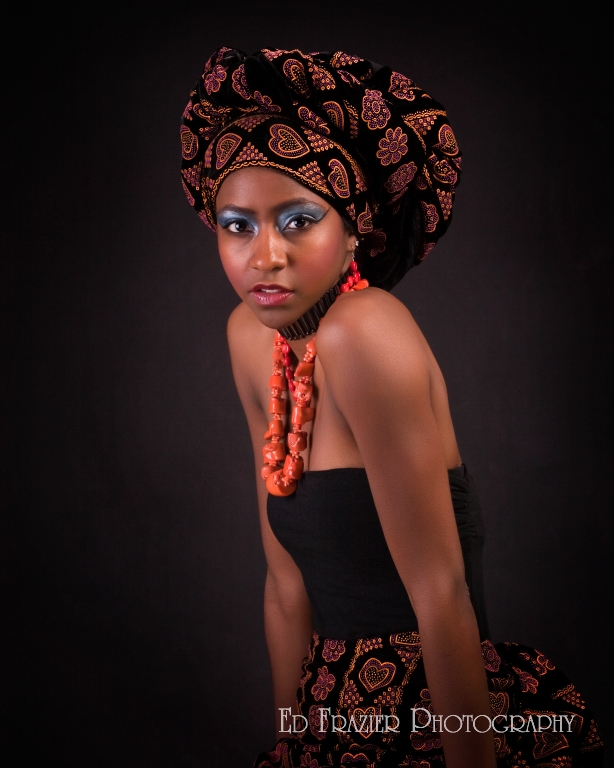 Katrina as one of Fela's Wives

Pep as one of Fela's Wives